Tag Archives: “Bring It On”

WHO: Denzil Porter will be headlining FIRST LOOK SESSIONS LIVE with guest performances by Deena Jonez, Fedel, D.A. the Future, A.D.D. and more.  Hosted by DJ Blake with live interviews by Alina Kim.  Photography will be by DPI Creative and videography by Vokle & B2T Productions.

WHAT: FIRSTLOOK iTV Networks presents FIRST LOOK SESSIONS LIVE with Denzil Porter as a salute to the Bronx, where hip hop was born.  Tickets are $10.  If you are wearing a pair of Ray-Ban glasses at the door like Denzil Porter, tickets are only $8.

Comments Off on FIRST LOOK SESSIONS LIVE performance with Denzil Porter – Wednesday, May 23, 2012

BRONX, NEW YORK MAY 1, 2012 – Denzil Porter releases his newest music video to “Bring It On” with a B-side sample of “Ray Bans”.  “Bring It On”, produced by Trent is a feel good track off of Denzil Porter’s newest project Home Made Music.  The video can be viewed via YouTube here: http://youtu.be/d2H1GiI6gLc.

The video, produced by Stein A., is soulful, nostalgic and easy-going.  Inspired by A Tribe Called Quest’s “Award Tour” video, Denzil Porter gives you the visual to a song representing that special time in hip hop when music gave the listener a feeling of freedom and jubilance.  On this playful track, Denzil is able to just rap with no barriers, allowing him to “rap and say what he wanna” just as long as the “music don’t stop”.  “Bring It On” was created as a timestamp so that whenever one hears the track, be it today or 20 years from now, the listener will be able to reminisce on that good feeling this song gave them then and for years to come.

“Ray Bans”, produced by Christopher “Claws” Stevens, who is featured in the video, is a more current sounding track that blends right in at the end of the video with it’s smooth, futuristic beat and contemporary style.  Allowing listeners just a minute long taste of the track, Denzil Porter gives viewers a combination platter of music, which leaves us all only wanting more.

To listen to “Bring It On” on SoundCloud please visit:

To download the “Bring It On” MP3 on HulkShare please visit:

To download the “Ray Bans” MP3 on HulkShare please visit:

Denzil Porter grew up in the north Bronx, NY with a passion for Hip-Hop music from a young age.  In high school Denzil Porter began freestyling and battling, defeating all competitors.  In 2004 Denzil Porter founded WreckHouse Entertainment, which produces music out of his in-house studio and hosts parties and events.  With three mixtapes under his belt: On My Way Home, Live From The Other Side, and Home Made Music, Denzil Porter is definitely a force to be reckoned with.

For more information please contact Jeunesse Yvonne at JeunesseYvonne@gmail.com or 917-596-6174.  To listen to more music from Denzil Porter, get the latest news and updates and to download Home Made Music please visit www.DenzilPorter.com. 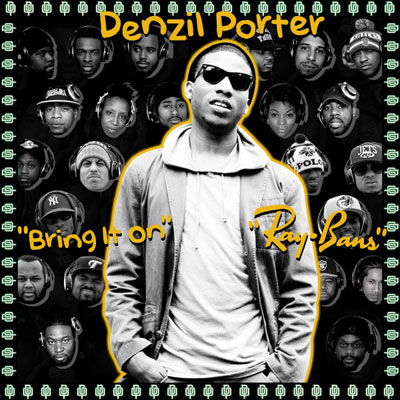